Lilium columbianum is among the most widespread of the western American species. Occurring from sea-level to 9,600 feet (2,926m) it is found principally in moist to dry soils. The noun 'Columbia' was first used in 1775 to refer to the United States of America. Columbia is the honorific name of Christopher Columbus who landed in Caribbean Islands of the Bahamas and Cuba in 1492. Columbia later became the deified female personification of the United States. Columbia represented the best altruistic qualities of the American spirit and enterprise.

Lilium columbianum grows throughout the Pacific Northwest from Canada, British Columbia south to the central Sierra Nevada, creeping as far east as Washoe county Nevada near Reno in its southeastern most range. And as far as Lincoln county Montana in the northeastern range.

There are two recognized types. The typical Lilium columbianum columbianum is by far the most widespread throughout the entire range. The only recognized subspecies is Lilium columbianum igramii (Anderson 1942) which is found in a small area along the southern Oregon-northern California coast. It is a larger more robust plant, with larger flowers and a deep burnt orange color. One might think it was a natural hybrid if there weren't other populations of similar specimens scattered throughout the area.

Lilium columbianum is very uniform across its entire range. The bulb is small and white, composed of almost paper-like scales. Yet it can grow very deep (up to a foot (30cm)) in almost hardpan soils that a pickaxe can hardly dig through. The stem is long and graceful from a foot to 7-feet (0.3-2m). The leaves are broadly lanceolate arranged in whorls. The inflorescence is a bracteate raceme of alternating Turk's cap flowers colored bright yellow to deep orange covered in fine purple spots. The stamens are held tight to the pistil and covered in bright orange. It flowers from May to July depending on altitude and latitude. The seed is small and light brown, hypogeal germination in fall at very cool temperature (40F and below).

There are mutations or genotypes that occur where the spotting is so heavy the center appears almost black, similar to the black jaguar. Eddie McRae discovered a small population near Dee, Oregon that had such heavy spotting the flowers appeared black all accept the tips of the petals that were still orange. Gene Mirro discovered a similar population in the Columbia River Gorge in Washington. This would seem to suggest that the phenotype is a melanistic form caused by a mutation, that though rare, does occur and is a heritable trait.

Subtype ingramii is found in a small area from Brookings, Oregon to Eureka, California. It is larger and more robust than the typical form, with a large flowers that are a deep burnt orange. It is otherwise similar to the typical form. Eddie McRae grew several hundred from seed I collected from along the Chetco and Rogue rivers in Oregon. He agreed it wasn't a natural hybrid but a distinct subspecies or species.

Lilium columbianum shares the same climate as other Western American species. The Pacific High Pressure Zone dominates the PNW region. The PHPZ is a semi-permanent, subtropical area of high pressure in the North Pacific Ocean. It is strongest in the Northern Hemispheric summer and is displaced towards the equator during the winter when the Aleutian Low becomes more dominate. Comparable systems are the Azores High and the Bermuda High. 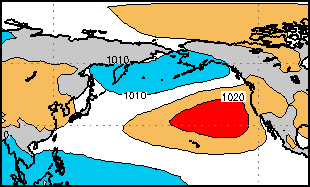 There are literally 1000s of Lilium columbianum growing along the roadside of Hwy-101 in Del Norte Redwood State Forest in California. The Park service mows in late winter to remove competition, then agian in late fall after the stems have died down.

The bulbs of Lilium columbianum were eaten by the indigenous Pacific Northwest Salish people. They were dug in fall and steamed in a large pit or boiled and eaten. The Nuu-chah-nulth of the Salish used them to season food such as fish and soups as they said they have a very peppery taste.

Lilium columbianum is among the easiest Western American species to grow. It is delayed hypogeal in late fall with very cool (40F and below) temperatures. The soil should be very mineral with lots of sharp gravel. It detests wet soggy soil with lots of organic matter, so stay away from peat based potting mixes (you should always avoid peat based mixes as they retain too much water and are often far too acidic), or any potting mix with lots of organic matter. You will probaly have to mix a 75%-25% (sand/coarse horticulture gravel : potting mix). It's always better to have too much grit than too much organic matter. Eddie McRae sowed seed of Lilium columbianum, washingtonianum, bolanderi, kellogii, etc., in road scree he shoveled from the side of the road. He also sowed them in almost pure sand (75% sand : 25% soil mix), similar to the volcanic soils and scree they inhabit. Moisture is not the issue as these lilies grow where there are frequent summer thunderstorms, and often near streams or moist areas with cool flowing water. The issue is drainage and FAE (fresh air exchange). The bulbs must dry quickly after watering which requires excellent FAE, as well as stay cool in summer. Soil temps should never exceed 70F. This can be a challenge if using pots, as pots are typically 10F+ or more above ambient air temperature. In summer pots can reach 120F in full sun, high enough to cook a lily. Eddie grew most of his lilies that were in pots in shade houses for that very reason.