Introduction: Lilium nepalense is a large complex of related lily types, subspecies, and variants from a large geographical area of Indomalaya from Bhutan, Nepal, Myanmar, and southwestern Yunnan province of China. At present, the relationships between variants in the complex itself are poorly understood. There seem to be many types that are very similar that may or may not be separate species or just geographical subtypes of a single species. In other words, the whole section is a taxonomical nightmare.

It has been proposed that many lily species from Indomalaya that are currently recognized, are likely all members of a large and extraordinarily variable species complex currently recognized under at least four different species names and an additional four varieties or more. As with many species from exotic or difficult-to-reach locations, those in cultivation only represent a tiny fraction of the actual diversity of wild types.

Print of Lilium nepalense, botanical illustration drawn by Matilda Smith and lithographed by J.N. Fitch from Joseph Dalton Hooker's Curtis's Botanical Magazine, 1889, L. Reeve & Co.. The type represented in this print looks clearly to be what is today called Lilium primulinum var. burmanicum. Some argue this should be the species type Lilium nepalense nepalense.

Like botany, taxonomy has rules too, but the thing with taxonomy is, those rules differ from country to country, and can be rather arbitrary. Until DNA analysis solves this debate we are going to have to accept a great deal of ambiguity and agree to disagree with this region's taxonomy of Lilium.

The original type collected by Don in 1821 is preserved at Kew Garden and can be seen here. It was collected near, or in, what is now Langtang National Park in Nepal.

Today, most of what is labeled Lilium nepalense is sourced out of Kalimpong and Sikkim, India near Bhutan and Nepal. Since most of the current material is sourced from this small area, it represents only a small fraction of material of a much more diverse species. People familiar with the species in that region say it represents only the southern form of that geographical variety. What little material that is sourced from China is almost exclusively from the southern Yunnan province on the border with Myanmar. The cultivated variety in Europe and the West then represents only the southern extreme range of the species. The species varies greatly over it's range, with different varieties/subspecies represented by the numerous phenotypes and hybrids seen as it extends south through Myanmar until it reaches the eastern extreme of its range in China.

Material sourced from China as Lilium nepalense is a smaller fraction still in comparison to the majority sourced from India.

Some authorities argue that Lilium primulinum var. burmanicum should be renamed the type Lilium nepalense var. nepalense as it is the most wide spread of the variants.

Lilium nepalense currently has only two officially recognized varieties for such a diverse species. Lilium nepalense var. concolor (Cotton 1937) is a solid-colored type, usually green to yellow, without any coloring in the throat at all. It is generally found in and around the Indian province of Assam.

Lilium nepalense robustum (Elwes 1879) is a larger more robust version of the typical form originally collected. It is widely believed that it is this form that represents the majority of species in cultivation today. We could find no information as to the source of the specimen originally collected. However, it appears very similar to the type collected by Don, and is very similar to the type most currently grown in Europe and the west, as well as variety found in the most northern range around Nepal and Bhutan.

Lilium nepalense growing from between rock crevasses on a steep cliff.

Description: Lilium nepalense is native to the Indomalaya and Indochina: Himalayas, nearby regions, from northern Thailand, Myanmar, Bhutan, Nepal, Tibet and northeastern provinces in India such as Assam and eastern China. It prefers steep limestone slopes, forested margins, and mountainous slopes (McRae 98).

It is an extremely variable lily in terms of phenology. The flower is a down-facing trumpet, ranging from green, cream, to yellow with a purple throat, and with or without dark purple spots. The bulb is a flattened globe with broad overlapping pink to purple scales. The stem is stoloniferous wandering underground for some distance before emerging. The stem rises up to 5-feet with usually 1 to 3 flowers but can have as many as 5 or more. The flowers are very fragrant, especially at night, to attract hawk moths (Sphingidae ssp.), the primary pollinator.

Seed is pale brown with narrow wings, and is immediate epigeal in late spring or early summer. (McRae 1998).

Dry evergreen forests in this region are more appropriately called semi-evergreen because a significant proportion of canopy trees are deciduous at the height of the dry
season.

Lilium nepalense inhabits soils of the Himalaya foothills and lowlands, which are the products of erosion of the Himalaya mountains. This material is then carried by runoff downslope and deposited as alluvial deposits. Alluvial soils are loose, unconsolidated soils or sediments that have eroded, or been reshaped by water in someway. Alluvial soils, which are rich in humus and in Phosphoric acid, lime and potash.

It also grows in podsolic soils that develop downslope in the foothills. Acidic by nature, they are covered with a thick layer of humus which does not decompose due to low temperatures and short summers. Podzols can occur on almost any parent material but generally derive from either quartz-rich sands and sandstone or sedimentary debris, provided there is high precipitation. Most podzols are poor soils for supporting plants due to their sandy composition, which results in a low level of moisture and over all nutrients. However, Lilium nepalense thrives in this environment. Some of these soils are sandy and excessively drained. Others are shallow and the underlying bedrock makes for shallow rooting zones and poor drainage due to subsoil cementation. A low pH further compounds issues, along with phosphate deficiencies and aluminum toxicity.

Further downslope, the lily grows in brown forest soil that is formed under broad-leaved vegetational cover. Its humus is pH neutral and it does not form thick layers. Mountain soils are found in the valleys and hill slopes of the Himalayas at altitudes of 8,200-feet (2500m) to 9,800-feet (3000m). These soils are the least studied, and often the vegetation cover helps in their classification.

A critical key to understanding the needs of lilies from this region is the annual monsoon, which dictates temperate and precipitation. Precipitation is driven by the monsoon storms, which migrate through the country in the summer months (between June and September) and bring 9-18 inches (250-450mm) of rainfall each month to a majority of the country, except for the north-western mountains that receive between 3-5 inches (100-150mm) per month.

Precipitation in this region varies from east to west, but annual rainfall can be as much as 78-inches (2,000mm). Normally, the southwest monsoon can be expected to burst onto the western coast of India at the beginning of June and to cover the entire region by mid-July. The end of the monsoon season typically starts at the beginning of September and finishes by the beginning of October.

The northeast monsoon usually bursts around 20 October and lasts for about 50 days before withdrawing.

Cultivation: Given its wide distribution across Indomalaya, requirements of the various varieties might depend on where the particular variety was sourced from. However, Lilium nepalense has been grown in a wide range of climates, and cultural conditions, and methods around the world.

Coming from the subtropical forests, you might expect Lilium nepalense to be tender, but it is no fragile flower. Keep in mind that these lilies grow in a very dynamic meteorological environment. They prefer steep slopes and cliffs which provide excellent drainage and first class fresh air exchange.

In cultivation, Lilium nepalense has been grown very successfully as far north as Seattle, Washington in the United States, and Germany in Europe. The issue, as with many lilies from Indochina and Indomalaya is moisture and fresh air exchange. The wet and dry seasons are reversed, and many people forget that. These lilies are accustomed to monsoon storms and rain and howling gale force winds, often with protection from trees and other plants during the growing season, and dry cold winters. The opposite conditions for most of the Western Hemisphere and Europe.

They perform well in a variety of soils as long as they have excellent drainage. The fact they grow on cliffs and steep slopes should be a indicator of their need for excellent drainage, and fresh air exchange. The monsoon and tropical storms in summer produce considerable gale force winds. that help dry the foliage and bulb. Wet, stagnant soils and air are often fatal. 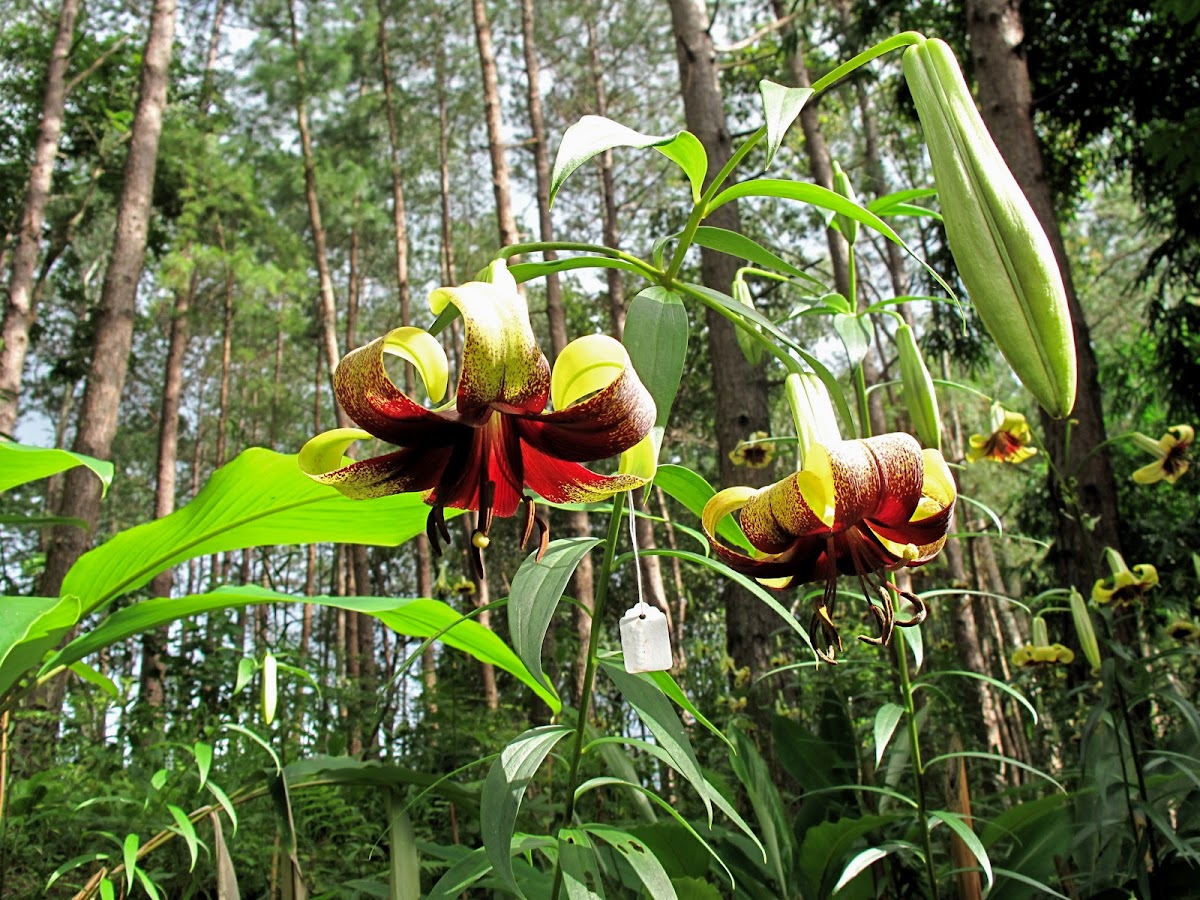